When it comes to building places for learning, building strong partnerships is as important as the quality of the materials used for a new campus project.

At Consigli, the strength of these partnerships is reflected in our 80% return client rate and the effort we make to foster great relationships with all project partners, from the school’s leadership team to a building’s future users.

For work with independent school clients like Millbrook School in Millbrook, New York and Andover, Massachusetts’ Phillips Academy these relationships are built through distinctive, dedicated efforts.

From exacting millwork construction for Millbrook, to incorporating building user input at Phillips, completing each detail with care, is completing the whole with care. 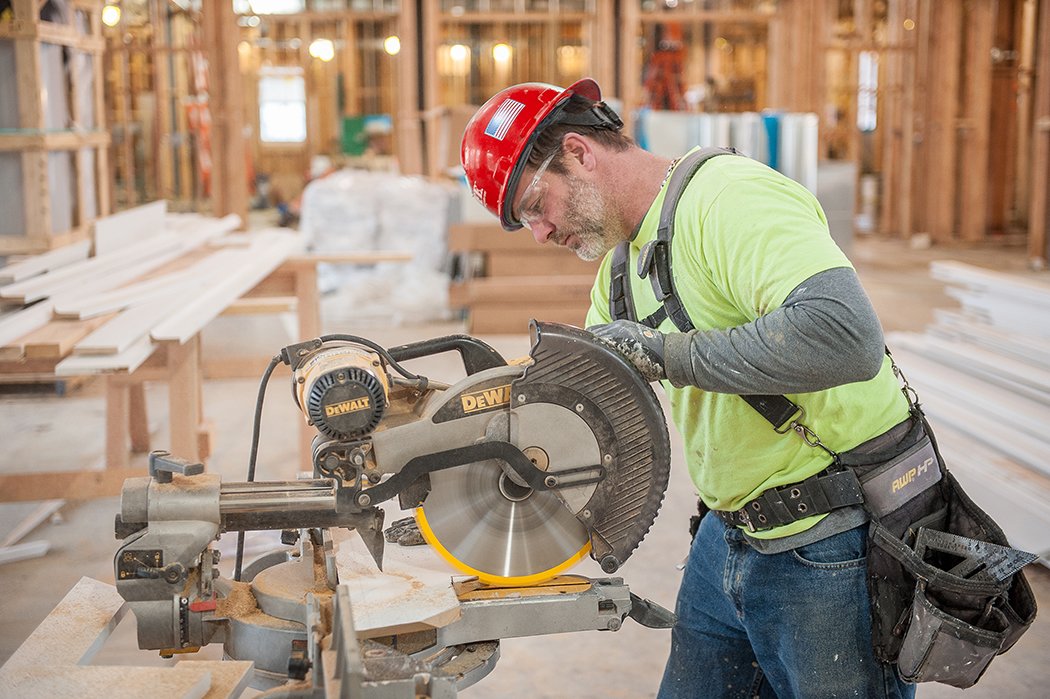 The fact that Headmaster Drew Casertano requests Consigli’s carpenters by name says a lot about the collaborative design and construction team that has been working with New York’s Millbrook School for close to ten years.

In discussing the strengths of the on-going collaboration, Casertano explains, “We now have long term relationships with the two key entities in our construction—Philadelphia’s Voith & Mactavish Architects (VMA) and Consigli—and they work very well together. There is mutual admiration. And the projects have been great successes. West Hall came in on budget and on time and it’s hugely successful. The Dining Hall is on budget and on time and will be transformational on this campus. The pre-construction role that the construction team engages in, with us and with VMA, is a highlight and central to the success of these projects.”

This independent college preparatory school, just outside the village of Millbrook in the Hudson River Valley, has grown since its early days to today’s student body of 300. A red brick, neo-Colonial campus, its buildings overlook lush landscape. As the school grows, the on-going mission is to preserve and enhance the best of its design and architecture so returning alumni will say “It looks just the same, only better.”

Since 2007, a core team has worked with the school’s leadership on a series of building projects that do exactly this. Beginning with the Hamilton Math & Science Center, opened in 2008, the results of this partnership now includes the transformation of the historic barn into “The Barn,” a new student center; the expansion of the Reese Squash Center; West Hall, a girls’ dormitory, and this summer, the completion of the new 400-seat Dining Hall.

Casertano expanded on why the construction team’s early involvement is so important to reaching this goal, “We want high level architecture—slate roofs, custom millwork—and we want it to be sustainable and well-built and that takes a high level of collaboration. For each project, our main concerns are always the same—to build something modern and green in a way that is consistent with the campus architecture and fits our budget—and that’s no small challenge. I am charged with bringing every project in at the agreed price, not a penny more. The team has worked very well with us in getting us construction cost information that allows to us to assess options. It’s a terrific collaboration, a real back-and-forth.”

Consigli’s Project Executive, Scott Cruikshank, noted that for the new Dining Hall, the team prepared a series of 18 cost estimates to support the school’s decision-making process as they finalized the design. And this rigorous process was not just an estimating exercise, it also involved the construction team in a “design-assist” role with the design team, identifying ways to achieve Millbrook’s aesthetic goals within the budget.

VMA Principal, Daniela Voith, FAIA, highlighted important ways the construction team assisted with the design, early on, “Our first design concept for the Dining Hall sought to make the ceiling as high as possible using a tray-shaped design. The all-steel roof truss and structure required to build it, as we first designed it, was very expensive. The Consigli team looked at our design and suggested several creative alternatives, resulting in some significant cost savings, while maintaining the essence of the design intent.

“The first recommendation was that, if we could bring the ceiling height down from 24 and half feet, to 23 feet, the team could use a pre-fabricated truss for the main section of the building, sitting atop steel columns. So with only a slight loss of interior volume, the project saved a significant amount of money. Also, the team suggested that smaller structural spans, in other areas of the building, could be built using light gauge, rather than heavy gauge steel, for further savings. These types of suggestions are very, very helpful.”

Another vital part of this long term relationship? Consigli’s team of in-house carpenters. While very few construction management firms have craftsmen on staff, Consigli does, and their skilled contributions are central to the successful work for Millbrook—and the reason that these craftsmen are now on a first-name basis with the architects and the school’s leadership.

As Millbrook has expanded its campus while honoring its architectural heritage, creating an aesthetic continuity between the original and new campus buildings is a central goal for VMA’s design work, and for Consigli’s construction of that design. Millbrook’s style of Neo-Colonial architecture is notable for its distinctive interior trim finishes—like bands of crisp white crown moldings that grace the tops of walls, drawing the eye upward. And it is architectural details like these, in both old and new spaces, which help create this continuity.

The trick with this custom trim work? Built with many layers, and many angles, it requires exacting precision. And there is a lot of it. If millwork is cut at an angle just off what is needed—that crispness is lost. This is where Consigli’s carpentry team has risen to the architects’ challenge—again and again. Voith commented, “We’re very fond of the millwork crew that Consigli brings in, the same carpenters have worked with us on all four projects. We understand what they are capable of and we like to challenge them in terms of really difficult details. Those guys are just amazing.”

Joking about the amount of trim work that is currently being installed in the Dining Hall, VMA’s Project Architect Sennah Loftus recalled, “When I was on site last week everyone was trying to figure out, if we laid out all the trim work end-to-end, how many times it would wrap around the Earth!”

Headmaster Casertano tells a story about one of Consigli’s much-requested carpenters, John Kennedy, known as “the Duke.” At one point, while the Duke was working on transforming the campus’s 200-year-old Barn into the new Student Center, renovations were also underway to expand the Squash Center. As the Headmaster visited the work on the Squash Center, he noted custom millwork that he knew needed the highest skill. “I talked with the team and asked if we could please have the Duke come over to the Squash project. He did, and he did all the work beautifully. It’s fun to see people take such pride in their work.” 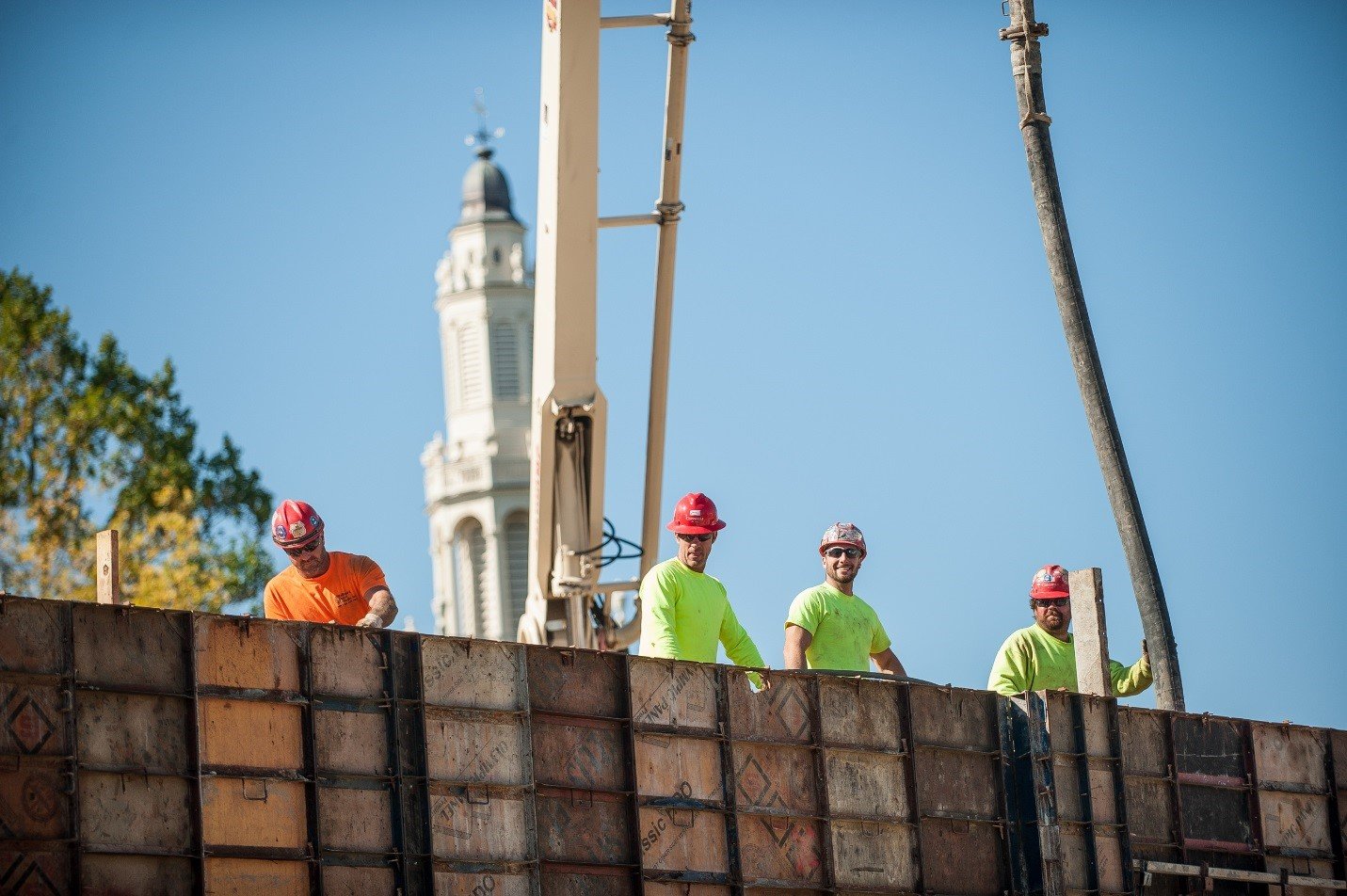 Phillips Academy’s new Rebecca M. Sykes Wellness Center reflects trends in healthcare facilities today, as well as reflecting this leading independent school’s educational—and environmental—missions. The first new building on Andover’s campus since 2004, its construction is the latest in a series of projects, large and small, that Consigli has built for the school.

As Andover’s new medical director, Amy Patel, explained when the project began, “We’re bringing everything under one roof, which brings us in line with the evolving model of healthcare. It’s a more proactive approach. Part of what we’re doing is educating, to help students recognize the signs and symptoms of illness.”

Throughout construction, beginning when the future medical spaces were only roughly framed, the team benefitted from regular site visits and comments from the building’s future staff.

Project Manager, Eric Thiboutot, explains, “This is so valuable, talking with the end users, as early and as often as possible. This steady input was thanks to Andover’s Owner’s Project Manager, John Galanis. When we had only the walls roughly framed, he started touring the building’s future users through the spaces. And these tours continued as our work progressed, so the building’s staff could confirm details like the best place for patient room equipment and fixtures.”

Thiboutot continues, “Even the most thoughtful design sometimes misses an important detail that can only be seen when built. If there is just one recommendation I have for building owners, it’s to have future building users visit a project as its construction progresses. It’s invaluable. It serves as a vital cross check to avoid last minute changes that can be much more complicated than making a design change when the building is still only roughly framed.”

To build this two-story, 17,000-square-foot Wellness Center Consigli’s team embraced a wide scope. From the removal of the site’s original 19th century residential building, to developing the blast strategy for the ledge-filled land, installing the center’s extensive geothermal well system, and assuring the new building’s brick was a strict match to the campus’ existing brick work, the Center’s construction required diverse know-how. Designed by the Boston architecture firm, Shepley Bulfinch, the LEED-Gold certified project is also built to be 40% more energy efficient and 36% more water efficient than standard construction.

One of the team’s most effective construction strategies was to pre-fabricate the building’s roof truss system. “Our Superintendent Jeff Martin and Assistant Superintendent Mark Gately developed this approach. It was great thinking. The challenge was this—what was the best way—safe, timely, cost efficient—to build a roof system designed with 28 metal-framed trusses. Our solution involved pre-fabricating seven sections of four trusses, bracing the assembled sections and then setting the sections in place. This approach reduced the original estimated cost for this part of the work by 39%, as well as cutting installation time from two weeks to just one,” said Thiboutot.

Opened this past December, the Wellness Center is now also a teaching tool on behalf of environmental wellness, too. Featuring extensive natural light, a 3,000-square-foot green roof and its geothermal heating system, students can take self-guided tours of the Center, and are able to study the building’s environmental footprint using the school’s dynamic, digital “energy dashboard,” that tracks electrical and natural gas use and the heating and cooling impact of the geothermal system.

From supporting student health, to teaching planetary health, the new Center is ready to fulfill its mission.