BOSTON, MA – Consigli Construction Co., Inc. announced today that GE has selected the firm to restore and renovate the two historic brick buildings that are part of GE Innovation Point, the company’s new campus in Boston. The announcement was made after a groundbreaking for GE Innovation Point that included GE Chairman & CEO Jeff Immelt, Massachusetts Governor Charlie Baker and Boston Mayor Marty Walsh.

“We’re proud to be part of a project and working for a company that are so important to the future of the region’s economy,” said Consigli CEO Anthony Consigli, who also attended the groundbreaking. “We look forward to creating space that will serve the needs of GE’s 800 employees, host first-of-its-kind educational and community programs, and provide greater public access to the waterfront.”

Consigli will rehabilitate two, six-story structures built in 1907 that once housed the New England Confectionary Company, or NECCO. The buildings, which total approximately 95,000 square feet in size, will house a FUSE co-working space for manufacturing innovations for entrepreneurs and small teams, GE Brilliant Career Lab to help students discover STEM careers and career path mapping, GE offices and a waterfront bistro. A pedestrian-only area will allow greater access to the waterfront.

“We’re excited to have Consigli join the team working on GE Innovation Point,” said Ann R. Klee, vice president, Boston Development and Operations for GE. “We’re proud to partner with another Massachusetts-based company as we enter the next phase of this project.”

The overall campus will be built in adherence with the United States Green Building Council’s LEED v4, the newest, most stringent rating, as well as GE’s internal wellness program, HealthAhead, and the principles of the WELL Building Standard.  In addition, the roof level of the Brick Buildings will capture rainfall, which will be stored internally for use for the building’s flushing system and for the landscape irrigation system.  It will also include a terrace with a vegetated green area for collaboration and relaxation, and to increase the sustainability and resilience of the project.  As part of the overall project, paved hardscape, lawns and natural vegetation will be created that slope down to the existing Harbor Walk along the Fort Point Channel. 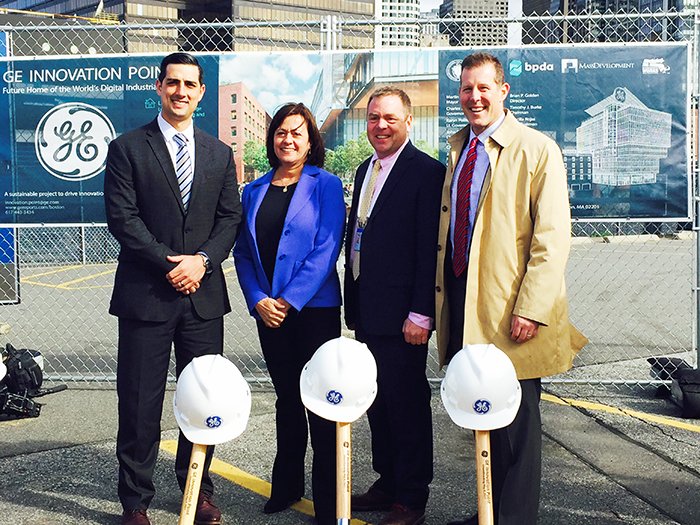