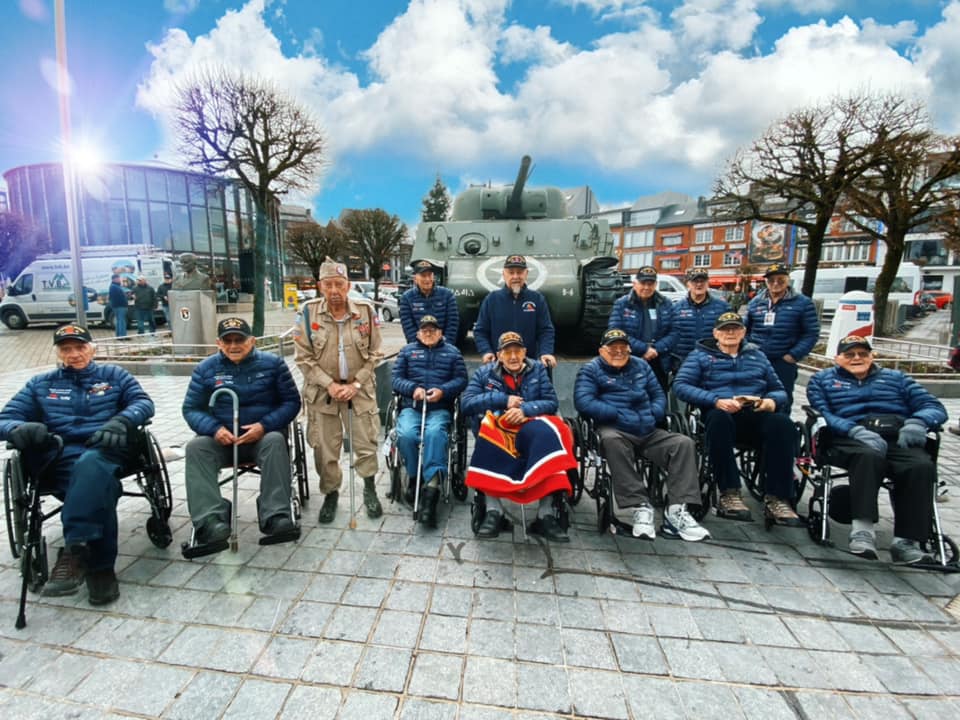 When Andrew Del Rossi Biggio, an Afghanistan War veteran, found a World War II rifle and later learned about one of the most important battles in that war’s history – The Battle of the Bulge; it inspired him to travel the country and document the stories of the survivors. His collection of oral histories will become a book published in the spring and will be a unique opportunity to hear directly from the remaining survivors about their experiences. Moved by the stories he heard, Andrew reached out to Consigli to help sponsor a six-day trip for these veterans to return to Europe to acknowledge their service and to remember those lost. In December, seventeen New England area Battle of the Bulge veterans left from Logan Airport to commemorate the 75th anniversary. As part of our ongoing commitment to veterans and to show our support for this momentous trip, we gifted the group Consigli jackets to keep them warm and easily identifiable to each other while in Europe. 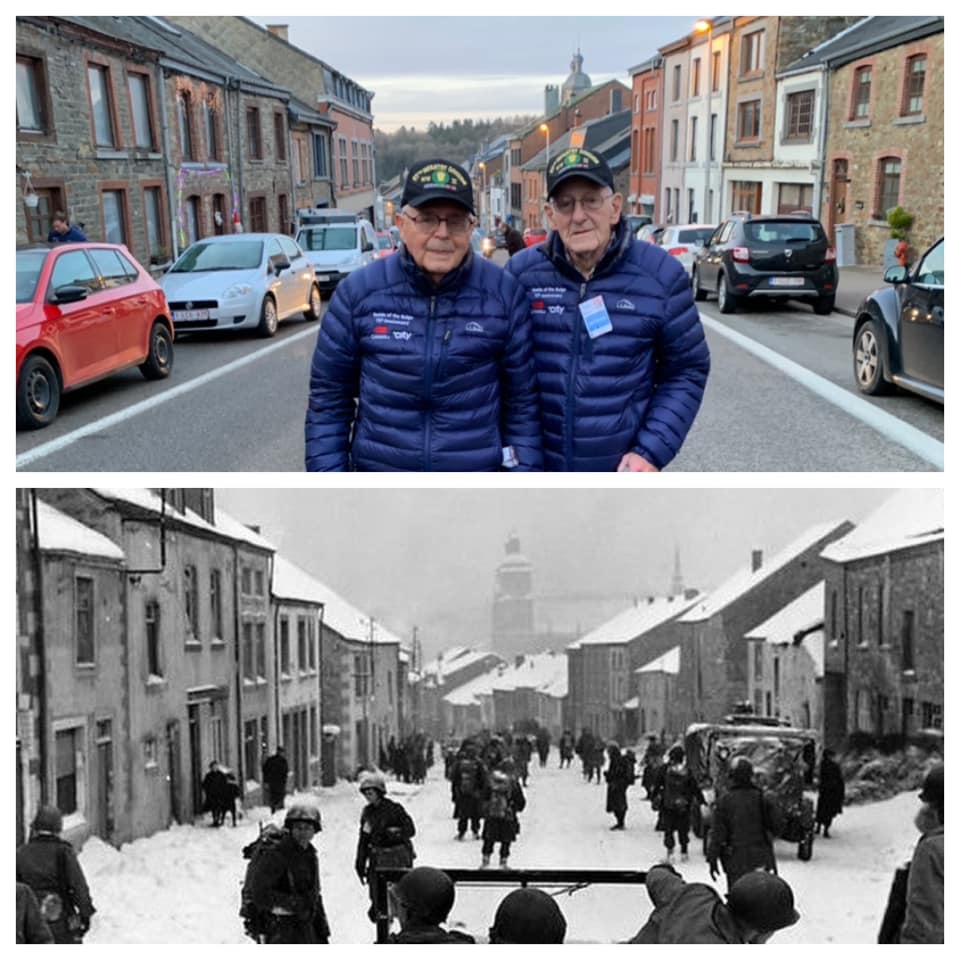 Ernie Roberts & Rodney Perkins standing on the same street in Belgium they marched through 75 years ago.

Known as one of the bloodiest battles in War World II, on December 16, 1944, Adolf Hitler launched the Wacht am Rhein (“Watch on the Rhine”), a surprise attack near the Ardennes Forest in Belgium. On that day, 200,000 German soldiers discharged a heavy artillery attack against 100,000 Americans. Known as the Battle of the Bulge, Hitler thought this battle would be the German version of D-Day in a final attempt to break through Allied force lines and reach the Atlantic coast. After almost two months of fighting, the Allies held strong and maintained their lines against the Germans, but at a heavy cost. Still known as the largest battle ever fought by the U.S. Army, more than 100,000 Americans were killed.

The veterans return to Belgium was a week filled with stories as each stop brought back a memory from a time when they put their very lives at risk for our country. At Luxembourg National Cemetery, they remembered the 5,100 soldiers that were lost during the battle. They were able to share a moment of reconciliation when a former German soldier and fellow veteran of the battle joined them in Bastogne. People of the town of Bastogne also gathered to celebrate with them during the annual Nuts Festival- a celebration that honors General Anthony McAuliffe when he responded “Nutz” (Go to hell) when the Germans demanded his division to surrender.

The 17th Airborne Monument in Luxembourg.

In Reims, France, John Katsaros of the 8th division Air Force, remembered this small French town as the place where he became a prisoner of war. Shot down by German troops, he jumped from his plane right before it crashed, sustaining serious injury. Unable to move, he was eventually captured by German soldiers but later rescued by the French resistance. A 10,000 Reichsmark bounty was placed on his head, and he was again recaptured. John was able to escape again by walking for days with no food and very little clothing over the Pyrenees mountains to cross into Spain. 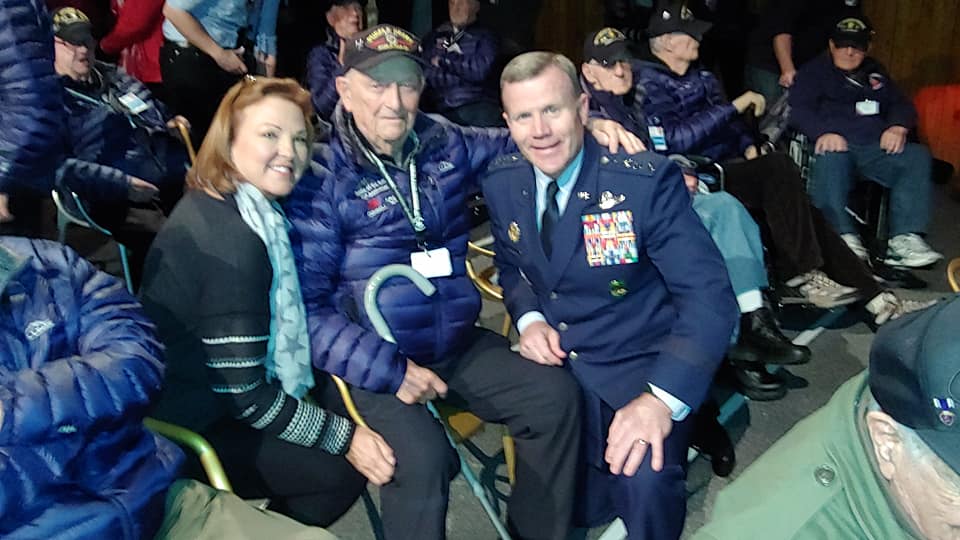 The 75th commemoration of the Battle of the Bulge was most likely the last chance for many of these veterans to return to the site where they bravely fought and a unique opportunity for us to hear their experiences directly from them. 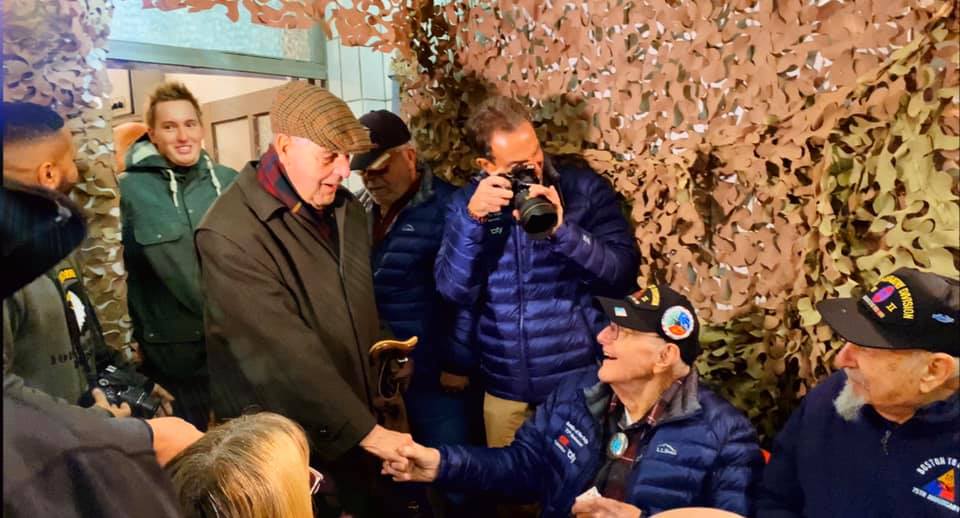 Veterans meet a German Tiger Tank Commander for the first time since they faced each other in battle.

As a company, Consigli strives to do more than just erect and preserve buildings; we also firmly believe in being committed to the communities where we work and live. Supporting veterans is important to our culture because the sacrifices that they have made in defense of our freedoms deserve our lasting gratitude. Additionally, not only do many of us have active-duty military and veteran family members, but we also have the honor of calling numerous veterans here at Consigli – our teammates.  It was our honor to help sponsor this trip, and again we want to convey our appreciation to these members of the “Greatest Generation” for their service. 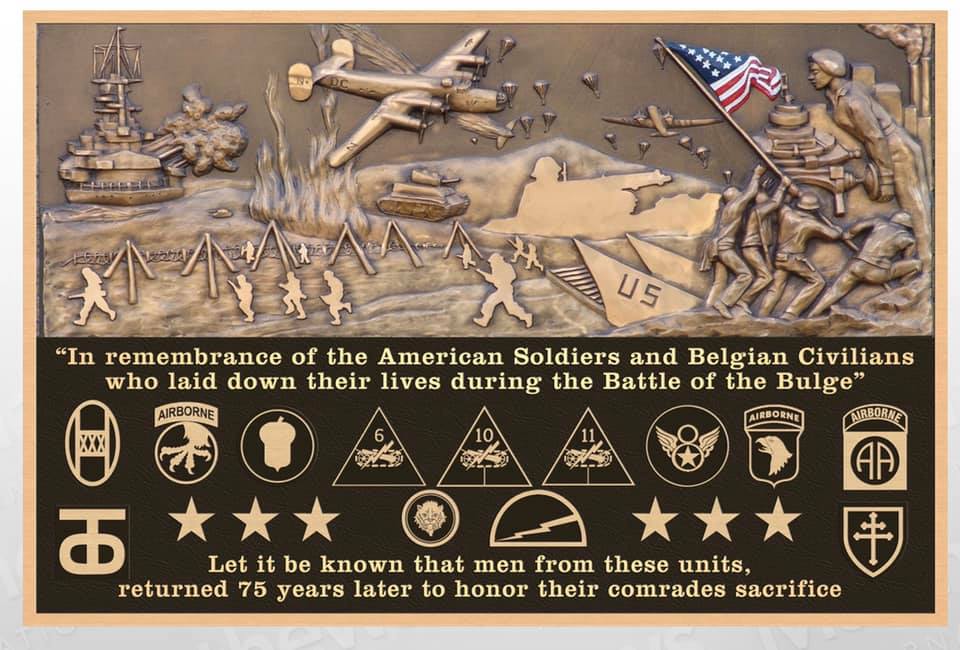 The plaque placed in Bastogne to commemorate their return to the site of the Battle of the Bulge.