BOSTON, MA – When it comes to library construction, you could say Consigli wrote the book. With nearly 40 library projects completed or underway, Consigli has built or renovated some of the country’s most intricate and historically-significant library buildings. From the FDR Presidential Library in New York, to the public library in the City of Cambridge, Consigli has become an award-winning national leader in the learning space.

How do Consigli’s teams do it? Two of the firm’s latest library projects illustrate Consigli’s special understanding of what it takes to build libraries today. The Johnson Building at the Boston Public Library (BPL), which officially opened its first phase on February 21, and Williams College’s new Sawyer Library, are the latest examples of the company’s library know-how—from “old world” craftsmanship, to construction strategies that ensure design intent, to the firm’s ability to self-perform work, giving more control over time, budget and quality.

Quality Management in the Stacks: the New Sawyer Library at Williams College 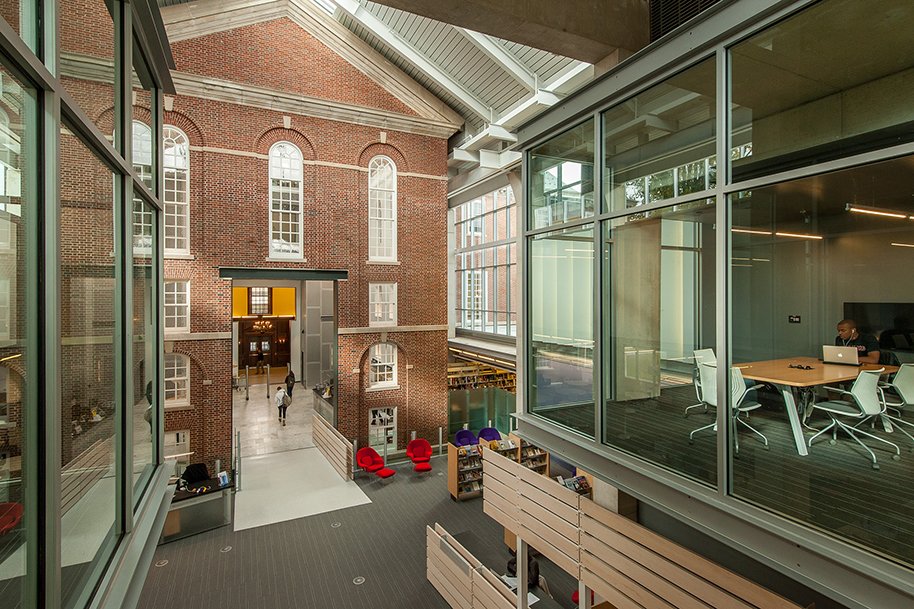 Completed in 2014, the new Sawyer Library at Williams College in Williamstown, Massachusetts is a breathtaking space that integrates iconic academic architecture with state-of-the-art design and technology. The new four-story facility has large, dramatic spaces with a frontispiece that is the historic Stetson Hall. Meticulously restored, this landmark allows the large library complex to fit gracefully within the campus’ historic fabric.

“This has been a monumental project. The construction lasted three years. The skill and perseverance of the crew was obvious throughout the process and all that hard work paid off,” said David Pilachowski, Williams College Director of libraries.

The Sawyer library project, like Consigli’s previous library work, involved a unique set of skills and experience that are critical to successfully constructing these revered, historic spaces. It also showcased Consigli’s quality management program which, according to the program’s director, Ken Amano, is both a process and a mindset.

“In large construction projects there is often a gap between the design intent and the best means and methods of construction,” said Amano, who came to Consigli after having spent over a decade at an architectural design firm. “There is a higher chance of this gap occurring in historic buildings, where you are often going off of older or incomplete drawings—you can’t just tear down walls to understand what you’re working with.”

Understanding the existing conditions of an historic building as quickly and thoroughly as possible is critical to its successful renovation. It is here that Consigli’s signature self-perform work makes all the difference. With over 300 in-house trades people, Consigli relies on the firm’s carpenters, masons and laborers to investigate existing conditions and explore prototypical building solutions up front, getting to the best finished project sooner and avoiding costly delays.

In addition to self-perform capabilities, Amano says Consigli is known for its “can-do” approach that often involves taking on unplanned, middle-ground efforts that fall somewhere between design and construction. The building of the Sawyer Library’s dramatic central staircase provides an example.

The design plan for the unique and complicated staircase involved using reclaimed marble slabs salvaged from the previous building as stair treads. These were meant to be cut and constructed after the installation of a curving wood wall that would anchor the near five-story staircase. But because of the sequence of starting up the permanent HVAC equipment to control atmospheric conditions where this architectural woodwork was to be installed, the re-sequencing of the wood wall’s construction was needed, so the Consigli team switched gears and moved fast.

“We attempted to anticipate where the wood wall slats would finally be by using a combination of laser scanning and traditional string-lining, allowing us to cut nearly all of the marble stair treads in the shop in lieu of field-cutting a third of the pieces at significant cost,” said Amano. “In essence, we installed two construction elements concurrently, when they were originally meant to be sequential.”

For Amano, this was all part of our partnership with the design team and our subcontractors.  “Our ability to anticipate the complexity of the intended design allowed Consigli to step in and take direct responsibility for something beyond typical coordination, for the good of the project.”

The Impact of In-House Know-How: The Boston Public Library 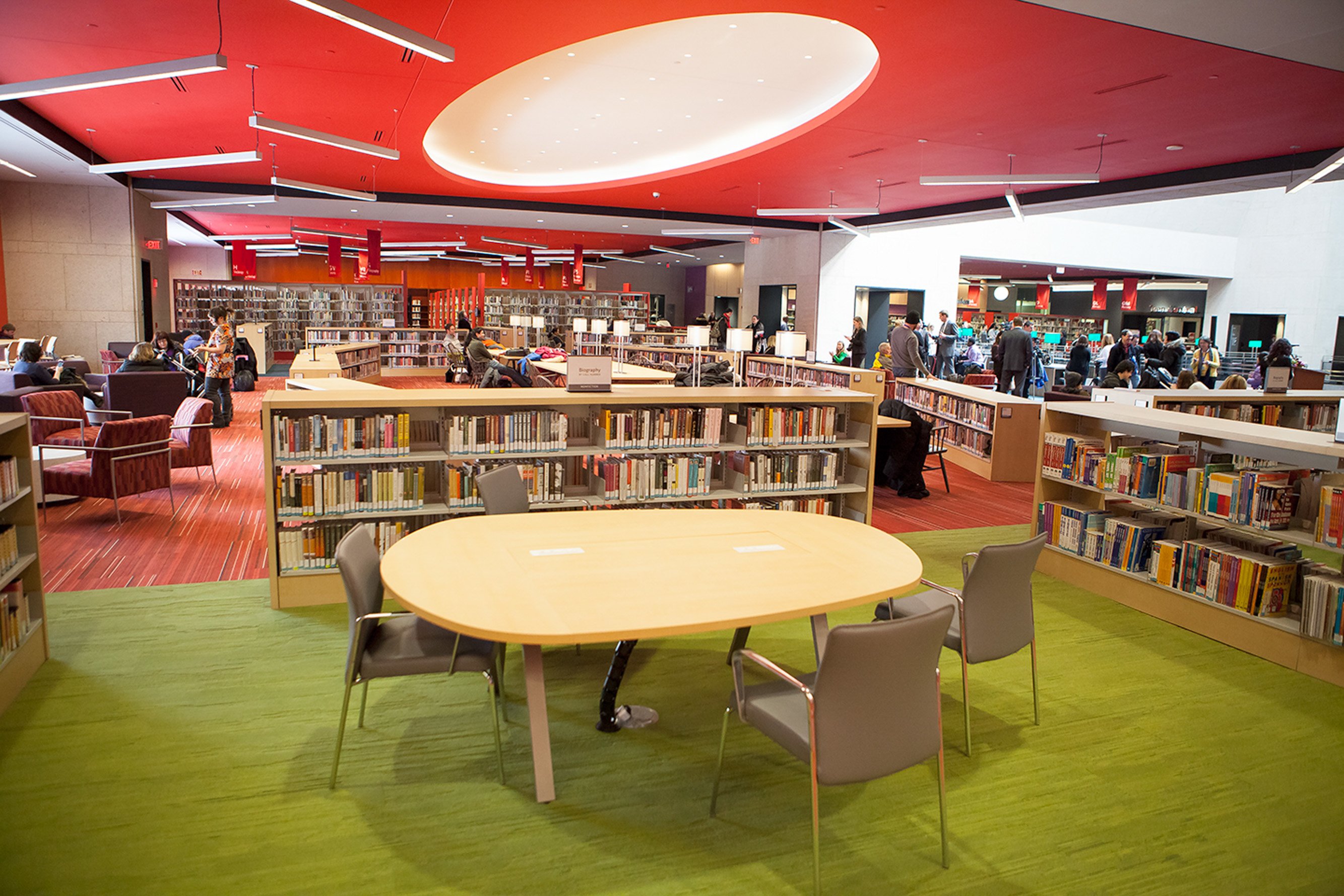 Designed by renowned architect Philip Johnson and opened in 1972, the Johnson Building connects to the Central Library (the McKim Building) in Copley Square and is a designated Boston landmark. In 2012, the library issued a request for proposals for assistance with a master plan for renovations to the Johnson Building that would: revitalize program spaces and improve user services; better connect the library to the city; and create an inviting first impression. After a thorough review process involving the building’s original architectural firm, Consigli was on the job.

“There is no doubt Consigli continues to be chosen for library work because of our expertise in large, occupied spaces involving phased renovations,” said Jim Hervol, Consigli Project Executive on the Johnson Building improvements at the Boston Public Library (BPL).

The BPL project includes two phases, allowing for minimal impact within the continually operating public library. Phase I focused on moving and enhancing resources from the first floor to the second in a way that accommodates major upgrades in technology. Phase II of the project, now underway, is a larger scale and even more visible to the public, with the transformation of the current granite wall into a glass curtain wall system that opens up the building and connects it to the street and community.

Hervol said one of the most important factors for the group choosing the library construction partner was the firm’s experience in keeping high-traffic public spaces open during construction—something Consigli is well-versed in given its work in landmark buildings, schools and hospitals. This involves expertise in noise and dust mitigation as well as strategies like overnight demolition, staging areas and non-disruptive egresses.

“People in the library couldn’t even tell there was any work going on,” said Phil Brault, Consigli’s BPL Project Manager, referring to that project’s Phase I work.

Brault says the interface with the architects on buildings with unique and historic design is key.  “We work with the designers every step of the way and very early on, helping them to work through design challenges and providing them with information that saves time and money.”

Doing so, often involves Consigli’s self-perform crews—the craftsmen who can go in at the start of a project and determine what challenges are ahead.

“This is a real advantage in historic renovations when you typically don’t know what you’re going to find until you do major demolition,” said Brault who pointed to one example where Consigli’s crews were able to disassemble part of the BPL’s landmarked granite staircase to give architects direction and the client a cost estimate very early in the process.

This collaborative approach is particularly helpful in dealing with the strict guidelines that come with “landmarked” projects or those on the National Historic Register where even small design changes require sign-off.

“This kind of process is not for everyone but we know how to navigate it,” said Brault.