Whether it’s academic, corporate, cultural or residential, Consigli’s portfolio of clients whose work has a lasting impact on their surroundings is extensive.

We understand that the needs of clients who provide a continual service to the community — like the Boston Public Library or the New England Center and Home for Veterans — cannot be interrupted, no matter how crucial the structural upgrade or renovation.

The same was true at the John B. Hynes Veterans Memorial Convention Center where we completed a full kitchen and food service modernization without interrupting the center’s ability to host events for Boston’s vibrant business community.

This type of phased construction is not easy but Consigli understands the importance of working behind the scenes so that the job gets done while the service continues.

The John B. Hynes Veterans Memorial Convention Center, built in 1963 and expanded in 1986, hosts meetings and large-scale conventions and exhibitions in the heart of Boston’s historic Back Bay neighborhood.

So, when the Massachusetts Convention Center Authority (MCCA) decided to undertake a renovation to modernize, reconfigure, expand and upgrade the 18,000 square-foot kitchen and 14,000 square-foot ancillary service areas, the Consigli team knew that careful coordination and complicated project phasing was required to maintain continuous service to the center’s clientele.

“This multi-phased project was very challenging, however, allowing the center to continue its very important function as a business hub was a top priority for us,” Consigli Project Executive Jim Hervol said. “We’re proud that we accomplished that critical goal and finished ahead of schedule so that the center could get back to business as usual.”

Consigli built the project over six phases to maintain a fully functioning and active kitchen for the center. By using strategic phasing to ensure full operation, the kitchen was constructed in different zones based on function. Each phase could not be started until previously completed areas were signed off, inspected and approved by city inspectors and the Board of Health.

Renovations included significant electrical upgrades with all new energy efficient lights and lighting controls, a new sanitary and waste drainage system, the installation of a large grease receptor and a new, higher capacity natural gas system that was extended from the building metering to the main kitchen gas distribution system.

To manage such a complicated work flow, Consigli used multiple shifts and off-hours work during peak event times. Egress routes were carefully established to provide a safe environment for both center staff and construction personnel, and temporary partitions were built to separate the active kitchen zones and work sites.

The result of this well-organized, multi-phased process? Consigli finished the work three months ahead of schedule.

Now, the convention center features an expanded, state-of-the-art kitchen that allows its staff to serve Boston’s business community as efficiently as Consigli completed the project.

Located next to City Hall in the heart of Boston, The New England Center and Home for Veterans has provided hundreds of transitioning service members with health care, addiction treatment, job training and employment services 24 hours a day, seven days a week, year round for more than 25 years.

Currently in its second phase, the project is a major renovation and reconfiguration of a space that was originally constructed as a bank in the early 1900s. Ultimately, the design will provide 35 new efficiency apartments, make service programs more accessible to veterans, upgrade existing facilities and bring the building into conformance with code requirements.

As a key player in the city’s efforts to battle homelessness, its most important service is a warm meal and bed on a cold winter night. So when center officials made it clear to Consigli that shutting these services down during a massive renovation project was not an option, no questions were asked and instead, only solutions were given.

“We tried to create the least amount of impact on the residents as possible,” said Consigli Project Manager Nick Picardo. “It goes without saying but this is a crucial project for us because of the center’s vital importance to the city and the services it provides to veterans who sacrificed so much on our nation’s behalf.”

To address critical concerns regarding safety, the project’s schedule includes six intricate phases, in which residents and staff are moved around the building so that work could be done in certain areas with minimal disruption.

For example, staff on the third floor moved to an offsite location to provide a temporary space for transitional housing residents whose fourth floor quarters were being renovated.

Now, as the project continues through the second phase, women residents have moved from the second floor to the ninth, to make way for a brand new health care unit.

A careful sequence will then unfold for the third phase of work: first, a second wheel chair lift will be installed to ensure handicapped access will be maintained for the entire Center, then renovations to the common area on the first floor will be made.

So far, the project plan has also required the orchestration of three major utility shutdowns — one electrical and two water — that were scheduled around the center’s operations. The Consigli project team made sure that the water shutdowns took place over night while the electrical shutdown happened on a Saturday when the center was mostly empty.

And these steps comprise, maybe, just 10 percent of a logistics plan that balances an impressive upgrade with the needs of a fully functioning service center. The project is scheduled to be completed in early 2017.

Keeping the Public in the Boston Public Library 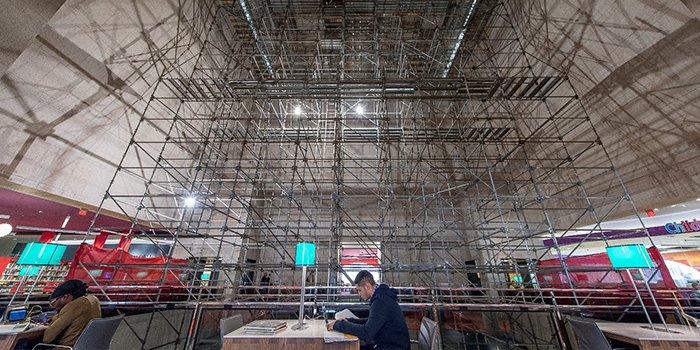 Designed by renowned American architect Philip Johnson and opened in 1972, Boston Public Library’s Johnson Building at the Central Library in Copley Square is considered an iconic modern building. But because of last minute security needs, Johnson’s vision for a grand, open and free-flowing civic space was never achieved. Our field team for this $78 million project met the challenge by developing two minutely phased scopes of work. The now-completed Phase 1 renovated the Johnson Building’s second floor, doubling the space dedicated to children and teens and refreshing and reorganizing collection, reference and community reading areas. Phase 2, complete this summer, is a comprehensive renovation of the first floor, mezzanine and lower level including a revitalized building exterior.

The renovations are designed to both meet the new strategic programming goals of the library and address needed upgrades, while realizing Johnson’s original intention to create a much more open and welcoming space.

Accomplishing that goal included creating a new 1,200-square-foot opening between the Johnson and 1890s-era McKim Buildings that required the removal of structural slabs, columns, and shear walls, to create what will be known as Boylston Hall, fully connecting the library’s future with its past.

One of the most important project milestones, the connection required what The Boston Globe called “structural gymnastics” including supporting the McKim Building’s fragile, century-old masonry brick wall and propping up the first and second floor with heavy duty mast shoring and structural steel.  Shoring powerful enough to support the existing McKim façade, weighing just over one million pounds.

And for Consigli to earn a perfect 10 on this gymnastics routine, the wall would have to come down while the library remained open and fully functioning.

As the nerve center for the entire municipal library body incorporating 24 neighborhood branches, the Central Library checks out approximately 900,000 items a year. Annually more than 1.4 million people visit the Central Library in Copley Square to study in the famous Bates Hall reading room, or sit in the gorgeous courtyard with a cup of coffee.

“This has been one of the more complex occupied renovations that Consigli has undertaken. As we approach the finish line, we are extremely proud to have been a part of the transformation of this iconic Boston landmark in the heart of Copley Square,” said Senior Project Manager Philip Brault. “This renovation will have a lasting impact on Boston and on the thousands of patrons that cross over its threshold on a daily basis.”

The result of all this intense coordination, planning and logistical maneuvering will be a revitalized library featuring a welcoming front lobby, updated program areas including a children’s library, teen area and a reader-friendly collection on the second floor.

Additionally, the granite façade will be transformed with the installation of a glass curtain wall system to create a stunning front door to the facility.

Expected to be completed this summer, the Johnson Building will be the proud, new face of the Central Library in Copley Square for years to come, and the realization of an architect’s dream come true.