BOSTON, MA – Consigli’s approach to restoring museum buildings resembles a curator’s devotion to the artifacts that are housed within them. From tagging and replacing original stones to matching ornate detail in plaster moldings, Consigli builders consider each museum job a masterpiece in the making. Just as museums are both monuments to the past and inspirations for the future, Consigli’s restoration work involves a combination of old world craftsmanship, state-of-the-art innovation and finely tuned logistical planning.

Consigli is the builder of choice for many landmark museums, among them the Smithsonian American Art Museum’s Renwick Gallery, in Washington, DC, the Museum of Fine Arts in Boston, Massachusetts, the Wadsworth Atheneum in Hartford, Connecticut and the Museum of Art at Maine’s Bowdoin College. All of these important buildings required a combination of craftsmanship, technology and customized solutions and serve as examples of Consigli’s signature integration of all three.

The Smithsonian Institution in Washington, DC, is made up of a series of diversely-designed buildings, but its famous face is the remarkable, red-stoned Renwick Gallery—just across Pennsylvania Avenue from another notable DC building, the White House. The Renwick, the first purpose built art museum in the United States, is a National Historic Landmark and stunning example of Second Empire architecture that had not been renovated for forty years. In 2014 Consigli was hired to revitalize it from basement to attic, inside and out. Doing so involved integrating 21st Century building systems into the 19th Century museum using materials and methods that break the mold.

The Smithsonian’s goals for the Renwick, to make it a “21st-century destination attraction,” required a completely renewed infrastructure for the historic building—including a surgical-like systems’ installation in 19th century walls and ceilings that don’t have the interior wall and ceiling spaces of modern buildings. The technological upgrades also included newly-developed LED lighting that will increase the building’s energy efficiency levels by as much as 70%, transforming it from one of the largest consumers of energy in the museum space—to one of the smallest. An additional advantage of LED lights is their reduced cooling demand on the museum’s mechanical system since they are much more efficient than the typical gallery light, and produce much less heat.

“The transformation to LED lighting was one of many examples of the Smithsonian’s high standards,” said Michael Culcasi, M/E/P Manager. “This is a client who wants the very best in building restoration, new building systems integration and design.”

This use of technology also came into play when the Consigli team developed what would be the most advanced Building Information Modeling (BIM) the company has developed to date for a historic renovation. The creation of this intricate 3D digital building model started with laser-scanning the existing building with MRI-like precision. These virtual “blue prints” of the Smithsonian’s Renwick allowed managers to forecast everything from the complete rebuild of the attic to the installation of new ducts into existing walls.

For the Renwick restoration, this highly detailed model wasn’t only for building system coordination. It also enabled the team to recommend unique improvements for the client, like the suggestion for additional structural steel in the attic above the second floor galleries that would create a robust art installation environment, working with the building’s own structural system; as well the ability to identify pockets of unused space and suggest its transformation into valuable storage space.

The team’s 3D building modeling was also an instrumental resource for the coordination and security elements of this major renovation project, just steps from the White House. Teams could conduct virtual “walk-throughs” with everyone involved including tradespeople, to coordinate their work ahead of time, and museum staff who needed to understand the details of the project for logistics, as well as security teams.

“Our virtual construction modeling tools allowed us to put together a 3D logistics plan to present to the Smithsonian, Secret Service, Blair House, New Executive Office Building Staff and our subcontractors to effectively communicate plans to everyone. This facilitated fast approvals as well as a better understanding of our upcoming work,” said Justin Pollard, Assistant Project Manager for the Renwick’s restoration.

The renovation process also benefited from the team’s use of an innovative rolling aluminum frame Roof System manufactured by Haki—which was designed to accommodate the installation of a new mechanical level in the attic consisting of precast plank floor and steel structure without compromising the weather tightness of the building.  The system can be opened or closed on an as-needed basis—providing much more efficient access to cramped attic spaces while safely preserving the aging building below.

With the Haki roof system specially adapted for our site’s need, work crews opened the roof daily to make deliveries by crane of major structure and equipment and closed it at the end of the work day or when the weather dictated. The alternative would have been to have a roofer on site or on call to patch in the spots that were cut open each day. This would have been difficult given the varying temperatures and weather conditions experienced throughout the duration of the project.

“This roof technology is so valuable—it allows for a more secure system that better protects the building’s interior from weather,” said Adam Cirigliano, Project Superintendent, who also noted that it also vastly simplified coordination with the Secret Service on roof access and security, when the site needed to be shut down quickly in response to requests by the Secret Service.

Also an important historic restoration, the project’s highlights include the reconstruction of two, historically accurate vaulted ceilings in the second-floor galleries, exterior masonry and slate roof restoration, the repair of decorative plaster medallions, cornices and moldings, and the replication of the building’s original historic window profile in new blast-proof windows. 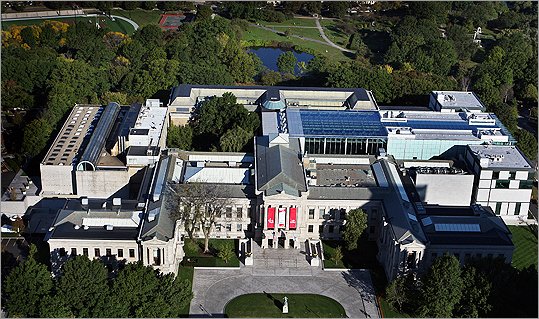 When the museum renovation mission at hand is the skylight replacement above one of the country’s finest collections of European Masters—and the renovation needs to happen while the gallery is open to visitors—it first requires construction logistics planning of an almost military precision.

One of Consigli’s most recent renovations for Boston’s internationally-renowned Museum of Fine Arts was for its 1915-era Evans Wing. The replacement of the outdated skylights that provided illumination to the European Masters collection hanging below was completed in just three months—and without closing the popular collection to visitors. But before the work in the 800-square-foot roof area could begin, the team first developed a comprehensive construction logistics plan to address the challenges of renovations for this high security facility and much-visited gallery, hosts to one of the MFA’s most popular collections.

This plan identified the steps needed to successfully respond to the schedule, to the significant challenges of the Museum’s highly advanced security measures, its restricted urban site on Boston’s Fenway, and the need to provide weathertight temporary protection in the attic space above the active gallery before demolition—and the opening of the roof to the sky—could begin.

A temporary, watertight, protective environment was built—by Consigli’s in-house carpenters—in the attic space above the active gallery, by using heavy­ plastic sheeting to create a bathtub-like barrier between the attic space and the interior lay-light ceiling structure immediately above the gallery. This barrier and a series of water-sensitive monitors installed in the attic, successfully kept the museum’s collection safe and dry through the project, and allowed the gallery to remain open through the three months of construction.

Another innovative component of the logistics plan was the use of roof top space adjacent to the skylight areas, as the project’s materials’ laydown storage area, avoiding the need to use the museum’s landscape for construction staging. And when it became clear that the project would need the abatement of asbestos used during the original construction of the early 20th century skylights, the team created a schedule based on exactly the amount of abatement that could be accomplished in a day, to avoid opening up more of the roof then was necessary, at any one time.

Consigli’s Project Manager, Adam Gordon remarked that, “We knew that one of the MFA’s main concerns was that the project be executed with as little impact as possible to the gallery and its visitors. By anticipating and carefully planning aspects of the project like roof access and materials delivery, we were able to get in and get out, without disturbing visitors below—or their ever knowing we were there.”

Keeping the Rain Out—and Then Some:
Building a Future for the Nation’s Oldest Public Art Museum—
the Wadsworth Atheneum Museum of Art 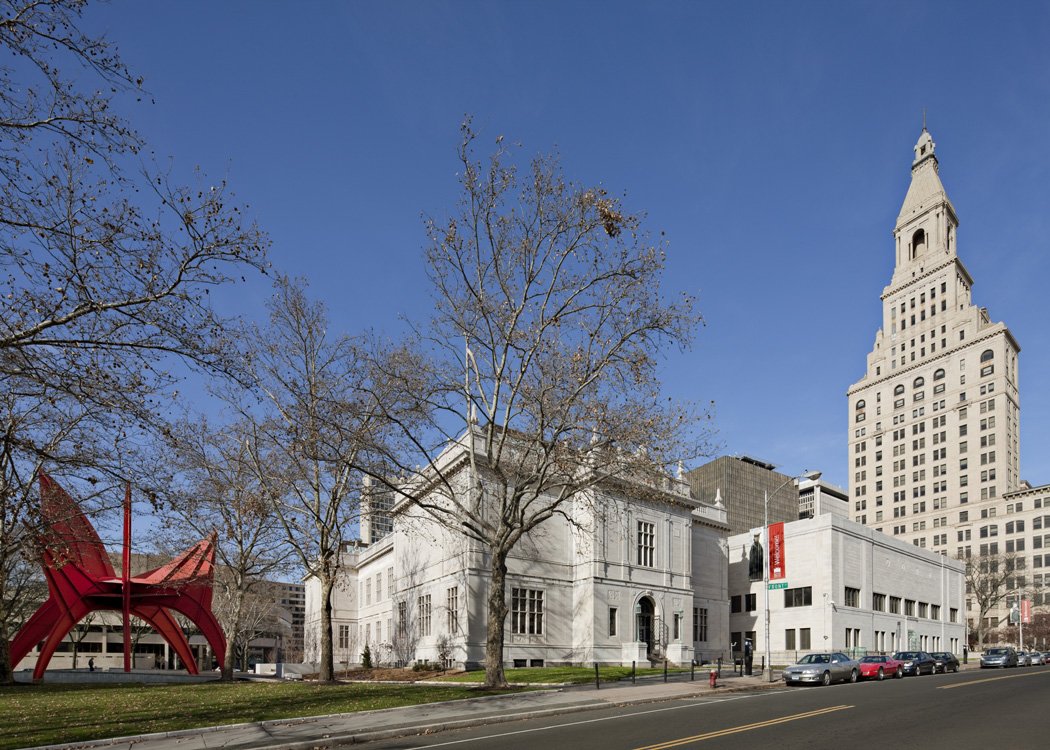 Founded in 1842, Hartford, CT’s Wadsworth Atheneum is made up of five connected buildings representing striking examples of Gothic, Tudor and Renaissance Revival and Modernist architecture.  A listed building on the National Register of Historic Places, this grand and historic space was the first public art museum in America and houses some of the world’s greatest art treasures. But after many years without a significant renovation, the Wadsworth buildings were aging in a way that could harm the precious artifacts within them.

In 2008, Consigli was chosen to work with Smith Edwards architects on what would be a complete envelope restoration focused on the museum’s primary structures, the Morgan and Goodwin Buildings.  Over these last six years, Consigli has now completed a full series of phased renovations—from restoring the masonry envelopes for all five buildings, to modernizing all of the museum’s systems, to replacing windows skylights and roofs—all the while applying carefully thought-out, out-of-the-box solutions the client has come to rely on.

“Consigli’s intuitive and perceptive understanding of the Atheneum project, coupled with their management style, allowed me to focus on other operational archives, all the while knowing that the project was in very capable hands,” said Alan C. Barton, Director of Facilities at the Wadsworth.

“One of our goals was to consider how our work could go beyond just reparation and actually improve the space. When given a chance to get inside these structures, we asked ourselves: ‘what outcomes could we achieve if we did things a certain way?’ ” said Dabek.

Examples of those results include recapturing 8,000 square feet of gallery space by building a new rooftop mechanical unit that would house new and improved HVAC systems previously stationed on the 4th floor. In addition, Consigli was able to enable Wi-Fi and create a new state-of-the-art lighting system by concealing replacement conduits, wiring and piping. The new lighting system enhances how visitors view the existing exhibits and is flexible enough to accommodate new shows.

As for “replacing the leaking roof,” Consigli replaced all of the roof systems and replicated the original skylights that had been covered over in the early 1980s. But they made one important improvement: the new system filters out light that could harm the artwork. Another example of how Consigli’s customized approach to museum renovation represents the future of preservation work.

The Wadsworth Atheneum Morgan building will reopen in the fall of 2015.