Walker Hall, the oldest academic building on campus, has been transformed into a state-of-the-art humanities and arts hub following a $16 million renovation and restoration. The significant renovation was completed over two summers, eliminating the need for modular classrooms and trailers during the academic year.

Originally constructed in 1890, the building has been revived with functional learning areas, including high-tech classrooms, shared departmental workspaces and art and theater rehearsal rooms.  An elevator and handicap lift have been installed, as have new lighting and wiring, plumbing, heating and cooling systems.  In addition, six new classrooms allow for better, more flexible class scheduling, while instructional spaces for visual arts are infused with natural light, and theater classrooms provide ample space for movement and expression. Walker Hall also continues to house several administrative offices—Admission, College Counseling, Business, and Head of School­­.

“Collaborating with Worcester Academy on renovation and restoration projects at the campus since 2007, Consigli Construction is honored to be part of this most recent revitalization of Walker Hall, which will serve the Academy’s students for many years to come,” said Anthony Consigli, president.

One of six buildings on campus listed on the National Register of Historic Places, Walker Hall overlooks the Academy’s central Quad. Restoration work on the landmark building included replacement of 220 windows with historically correct new units and 1.5 miles of new millwork throughout the building to match the original.

Significantly, the Walker renovation makes the building eligible for a LEED Silver (Leadership in Energy & Environmental Design) certification as designated by the U.S. Green Building Council.  The accreditation process, which is underway, underscores Worcester Academy’s commitment to environmental and financial sustainability.

Earlier this fall, all 650 students ceremoniously signed the blocks of granite that now cap off the building’s new handicap accessible side entrance, which faces the Quad.  The students took turns signing 10 large blocks. Each granite slab, which has since been set in place by Consigli’s masons, permanently recorded the successful conclusion of the two-year renovation. 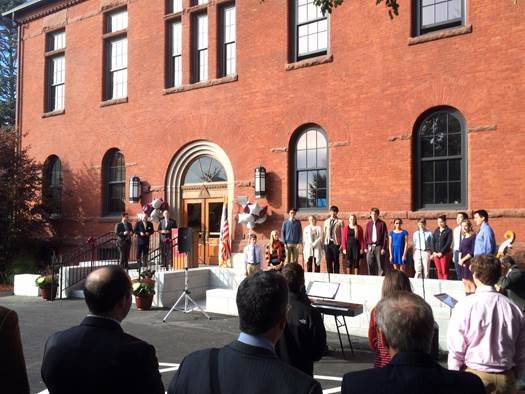